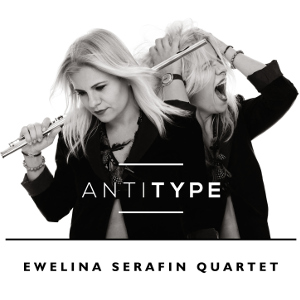 A few weeks ago, Ewelina Serafin’s quartet released its debut album entitled "Antitype". The album turned out to be a mix of both faster and slower compositions, more or less emotional and full of a different musical solutions. The album was recorded by the flautist and cooperating musicians: a keyboardist Nikola Kołodziejczyk, a bassist Jakub Mielcarek and a drummer Łukasz Kurek. While listening to the album, you can clearly feel that each of the eight tracks tells a different history and has a different atmosphere. And so the opening pieces "Killers 008" and "Communication" are rather joyful, "Longing of Souls" evokes a moment of calm and a kind of reverie, while "Darkint" begins very slowly and mysteriously, to accelerate its pace every minute so that listeners can feel the whole range of different emotions. It is worth noting that the author of all the arrangement is Serafin herself. I must admit that at times a small deficiency associated with the lack of vocals on the album can be felt. That hunger is somewhat silenced by "Ballad of the Sad City", in which Serafin sings. It also need to be pointed out that this composition (along with "Longing of Souls", "Communication" and the most exuberant of all - "Space in My Mind") were created in Leszek Możdżer’s studio in Wrocław, he was also responsible for synths throughout the album. In the bonus piece closing the album - "Sauna Box" - we can hear interesting beatbox parts performed by Jakub “Zgas” Żmijowski. As for a debut album, "Antitype" meets all the listener’s requirements. Jazz, dynamic songs full of all sorts of additives (e.g. beatbox), varied in terms of music and atmosphere, with vocals performed by Serafin. Now, all that remains is to wait for another album with the hope of more vocals by the artist and some new surprises.
source: jazzsoul.pl 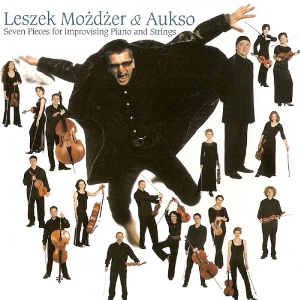 Seven miniatures for improvising piano and strings and a next incarnation of the pianist, who has recently been extremely active phonographically. The album is the fruit of long friendship and cooperation between Leszek Możdżer and Marek Moś with his string orchestra - Aukso. Together they create a very noble kind of jazz combined with classical music. The resulting music is of Polish origin, inspired by Szymanowski, Górecki, as well as great movie compositions by Kilar. Możdżer is the author of all the miniatures, a brilliantly performed piano concert by Henryk Mikołaj Górecki was added as a bonus to the album. As the author himself puts it: "The project with strings was created because of the longing of my heart and the need for rebound after years of playing avant-garde acoustic jazz." (AnKa)
source: ultramaryna.pl